In 1986, Traditional Balsamic Vinegar of Modena was granted D.O.C. protected status (Denominazione di Origine Controllata - Controlled Designation of Origin) under Italian law no.93 of 03/04/86. It was awarded D.O.P. status (Denominazione di Origine Protetta - Protected Designation of Origin, P.D.O.) by the European Community on 17/04/2000. It is the fruit of the particular soil and climate characteristics and grape varieties typically grown in the province of Modena, together with the age-old art of cooking the must and the careful annual decanting procedures between the vinegar loft’s barrels. It is obtained from a single raw ingredient: cooked grape must. The production cycle, which is unique and quite remarkable, is unlike that of any other agrifood product, and the
end quality is closely linked to the experience, know-how and patience of the producer.
There are four distinct stages in this highly artisanal process: harvesting and pressing, cooking of the must, fermentation and acetification, maturation and ageing. 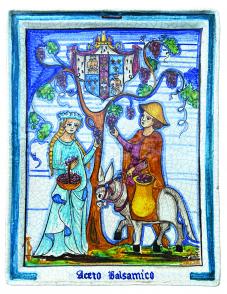 The grapes permitted for use are Lambrusco (all varieties and clones), Trebbiano (all varieties and clones), Ancellotta, Sauvignon, Sgavetta, Berzemino, Occhio di Gatta, as well as grapes from DOC vineyards, all of which must in any case be produced and harvested in the province of Modena. Harvesting and pressing: the vineyard is carefully managed to produce a maximum yield of 16 tonnes/ha (hectare) of grapes, far less than the amount permitted for production of local D.O.C.G. wines, which is 22 tonnes/ha; the grapes are normally harvested by hand, not only for better selection of bunches, but also because slower hand harvesting allows immediate cooking of the fresh must each time, before the grapes have the chance to start fermenting spontaneously. The choice of the degree of ripening for harvesting and any percentages of grape blends in the must are at the producer’s discretion. Soft pressing is used to obtain “free-run” must, which is sweet and fragrant with a low tannin content. 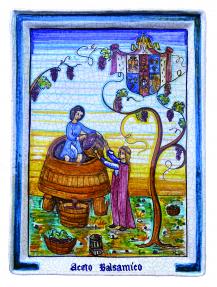 Cooking of the must

The must is cooked in open vats (at atmospheric pressure) over an open flame, at a temperature that can range from 95 to 70 degrees, as the sugar content of the must gradually increases as it evaporates. This very slow cooking process can sometimes exceed twelve hours, with the exact duration left to the discretion of the producer, who uses his judgment based on the harvest and the needs of the individual batteries of barrels. 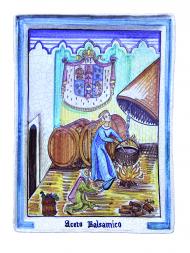 The cooked must is left to cool and settle, after which fermentation begins thanks to yeast and enzymes which are naturally selected in the individual vinegar loft. The fermented cooked must is then used to fill the “mother barrels”, where the alcohol produced during fermentation is slowly transformed by acetobacteria into acetic acid, leading to the production of the mother vinegar which, after gradual and patient concentration in a battery of barrels, creates the inimitable organoleptic complexity of Traditional Balsamic Vinegar of Modena. 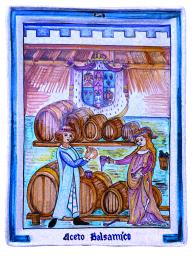 These last, character-forming stages take place in what is the veritable “production unit”, namely the “battery”. This consists of a series of barrels, normally of progressively decreasing size and often constructed of different woods, through which the vinegar passes over the years thanks to the annual practice of “decanting”. This operation is carried out each year, generally in winter, to compensate for losses due to natural evaporation and withdrawals. Usually, in winter, the smallest barrel is topped up with the necessary amount of vinegar from the second barrel, which is then topped up with vinegar from the third and so on, all the way to the last barrel in the battery, which is topped up with the mother vinegar withdrawn from the mother barrels. This process takes place annually and is skilfully managed by the individual producer, who personally carries out and oversees every step of the operations that sustain the battery throughout the slow maturation process. Only after a minimum of 12 long years may a small amount of finished product be withdrawn annually from the last barrel, i.e. the smallest one. Continuing with this procedure, the quality and organoleptic complexity of the vinegar tend to improve year after year, until it is entitled to the “Extravecchio” (extra-old) designation after at least 25 years of continued, expert care by the producer. This is therefore a “continuous” process with a synchronous balance between the amounts of product withdrawn and those transferred and topped up, so that the complex chemical and physical transformations that slowly take place in the unique, inimitable laboratory that is the battery, gradually lead the product to reach the perfect free-running, syrup-like density, the harmonious balance between sweetness and acidity, and the rich bouquet of fragrances and flavours that are the hallmark of Traditional Balsamic Vinegar of Modena. It is important to note, therefore, that expertly managed batteries can aspire to reach ever-higher quality levels by following suitably limited annual withdrawal amounts, which are at the producer’s discretion.