In 2009, the “Consorzio Tutela Aceto Balsamico Tradizionale di Modena” (Traditional Balsamic Vinegar of Modena Protection Consortium)was appointed by the Italian Ministry of Agricultural, Food and Forestry Policies (MIPAAF), which represents Italy within the European Union in matters falling within its sphere of competence, to protect and promote “Aceto Balsamico Tradizionale di Modena” (Traditional Balsamic Vinegar of Modena). While Italy has 836 products with Designation of Origin and Geographical Indication quality marks, and is acknowledged as a truly unique country in terms of products of undisputed excellence, Traditional Balsamic Vinegar of Modena P.D.O. is undoubtedly a special case: it is a product that testifies not only to traditions whose origins are shrouded in the mists of time, but also to the unique Modenese passion, love for the land, patience and know-how. Protected Designation of Origin (P.D.O.) means that the vinegar’s entire production chain, from grape harvesting to ageing of the product, takes place strictly within the boundaries of the Province of Modena; this constitutes a production and cultural heritage which are well-worth exploring in detail.

The Consorzio represents virtually all the producers, who are actively involved through their daily production and sales activities, in the promotion of the product and its unique characteristics.

On one front, the Consorzio collaborates with the appointed Supervisory Body which certifies all production stages in accordance with a stringent plan approved by MIPAAF; on another front, it coordinates promotional activities and monitors markets to tackle the frequent imitations and misleading or erroneous claims. It operates in a way that ensures transparency for consumers and defends producers who correctly apply the rules established in the Production Specifications. 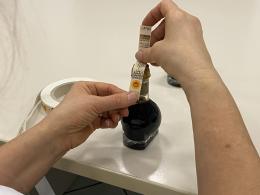 The Consorzio Tutela Aceto Balsamico Tradizionale di Modena offers a bottling service to all producers, carried out at its own bottling centre, which is also authorised by MIPAAF.

The Consorzio chairman, Enrico Corsini, has in the past held important positions in regional politics and agriculture; the fact that he is not a producer himself means that he is able to represent all producers with impartiality and fairness.

The Consorzio’s stated aims are: